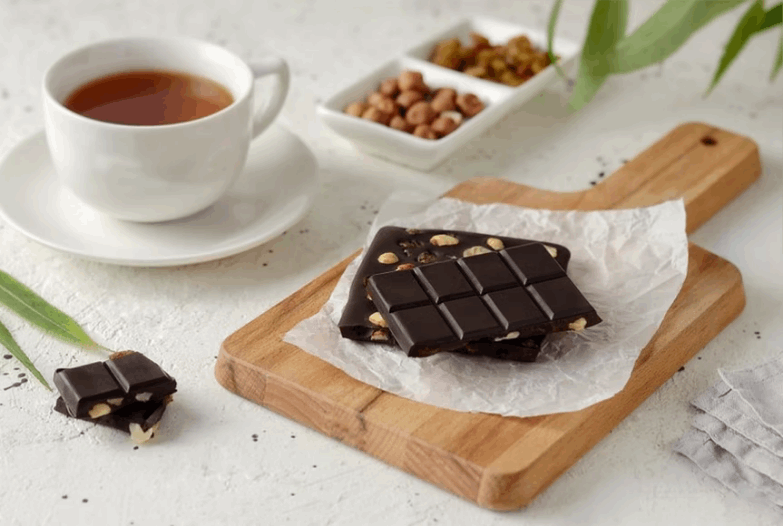 There are plenty of health benefits of dark chocolate, but most people would never guess that something so delicious can actually be good for them.

This article will focus on the top ten health benefits of dark chocolate, as well as how you can include it in your diet without going overboard and gaining weight.

If you’re looking to improve your general health, treat yourself to some dark chocolate and get ready to feel better in no time!

Many chocolate fans know that eating a square or two can provide some relief from PMS symptoms, but science has confirmed it.

A 2011 study in PLOS ONE found that women who ate a 100-gram portion of dark chocolate experienced a drop in levels of stress hormones and reported feeling more relaxed.

Perhaps more importantly, they were able to fall asleep faster and had fewer waking moments throughout the night. Their PMS symptoms improved, too: They reported less bloating and menstrual pain.

Recent research shows that a compound in dark chocolate improves memory and brain function. The study, performed at University College London, found that both dark chocolate and cocoa flavanols improve cognitive function by boosting blood flow to certain parts of your brain.

Though further studies are needed to determine exactly how much chocolate you’ll need to eat for it to have an effect on your memory, it may be best to enjoy small amounts (1-2 ounces) each day.

It’s worth noting that chocolates don’t typically list cocoa flavanols on their nutrition labels, so it’s probably best not to go on a binge in search of cognitive improvements!

Studies show that when consumed in moderation, dark chocolate has positive effects on your cardiovascular system. The flavonoids and polyphenols in dark chocolate help to lower blood pressure and improve circulation, helping to prevent heart disease.

Scientists also found that dark chocolate with a high percentage of cacao helps to maintain healthy cholesterol levels. It is full of antioxidants which are known to help your body fight free radicals that could otherwise damage cells and lead to disease.

Some studies have found that eating dark chocolate can boost levels of feel-good endorphins and enhance satiety. When you’re satisfied, you eat less—meaning, in theory, you could lose weight by adding a few squares to your diet.

However, research hasn’t confirmed these claims yet, and it’s still unclear whether there are actual benefits to regularly consuming chocolate.

The good news is that dark chocolate appears to be safe (unlike most over-the-counter weight loss pills). It has a high percentage of antioxidants—substances that protect your cells from damage—and provides some B vitamins and minerals like copper and iron.

You heard that right. A new study from Germany found that eating chocolate can actually boost your mood and make you happier (by increasing serotonin, dopamine, endorphins and other chemicals associated with pleasure).

This could be because dark chocolate is a healthy source of tryptophan — an amino acid found in many foods that your body converts into serotonin.

Serotonin is responsible for feelings of well-being and happiness. And as if that’s not enough to put a smile on your face, research has also shown chocolate may help reduce depression, too! So go ahead: Indulge yourself in some dark chocolate today! It’s one health benefit you can definitely enjoy.

The flavanols in dark chocolate increase blood flow to your brain, which helps improve your cognitive function. A study published in Neuropsychologia found that subjects who consumed cocoa flavanols performed better on certain mental tasks than those who didn’t.

Consuming a small amount of dark chocolate can help stave off age-related mental decline while improving short-term memory and focus.

Dark chocolate with higher cocoa content may even help reduce your risk for cardiovascular disease and cancer. A cup of hot cocoa (made with skim milk) or a square or two of dark chocolate after eating, especially before bedtime, may help you sleep better as well because it contains tryptophan, an amino acid that helps promote relaxation and sleepiness.

Research shows that flavanols found in dark chocolate strengthen bones by increasing bone density. The study suggests that these flavanols inhibit enzymes in our bodies that break down bone material.

This lowers bone turnover and preserves bone quality, as well as protecting against age-related bone loss and osteoporosis. The net result is stronger bones over time.

A recent review found a total of 21 trials studying how cocoa flavanols affect bone density. Of these, 18 studies were included in an analysis, which showed a mean increase in lumbar spine (lower back) and femoral neck (upper thigh) bone mineral density of 1%. These results suggest dark chocolate consumption might reduce your risk for developing osteoporosis.

The study involved 16 people with mild to moderate asthma, who were randomly divided into two groups. One group was asked to drink a daily beverage containing polyphenol-rich dark chocolate, while a control group was given a low-flavanol dark chocolate drink (less than 2 percent flavanols).

After four weeks, lung function had improved by 10 percent in those drinking high-flavanol chocolate. Results also showed other positive effects on asthma markers, indicating that it could be an effective option for managing symptoms and improving overall quality of life in patients with mild to moderate asthma.

Remember that crazy-sweet tooth we all had when we were kids? Even though you may have grown out of it, your teeth haven’t—you’re still at risk for cavities.

The best way to fight cavity-causing bacteria is to brush after meals, but sometimes that’s not enough. That’s where dark chocolate can help:

It also helps reduce acidity, which prevents enamel erosion and contributes to a brighter smile! If you can make it taste good, why wouldn’t you eat more chocolate?